On Sunday October 6th, people awoke to an unpleasant surprise in some parts of California.  Gas prices hit $5 overnight.  Some gas stations were forced to shut down because of fuel shortages.  Refined petroleum supplies are very low around the West Coast.  Although people have been assured that gas prices will fall again in a few weeks, will they?  Gasoline prices are dependent on the price of crude oil, and gas prices have become a political issue. 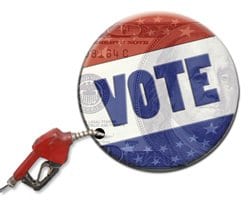 Gas prices have a huge effect on people’s daily lives, especially in automobile dependent cities where other transportation options are low.  The most immediate thing people can do is reduce their use of gas by driving less.  But this would only be a temporary solution.  We need to find long term solutions, such as using alternative fuel vehicles, better public transportation and new urbanism.  Of course, the switch would not happen overnight.  It would take a lot of time and effort on peoples’ part.  Cars have become such a part of daily life, that people might find it impossible to live without a car.  That’s one reason why a gas boycott would be extremely difficult to carry out.  A gas boycott would also serve to increase gas prices rather than decreasing them.  One way to lower gas prices would be to reduce the demand for oil.  That might even lead to reduce the demand for oil to zero.

Although they’ve hit an all time high in California, high gas prices or rationing is not such a new thing.  During WWII, gas was rationed, and people only had so much.  In Copenhagen, Denmark, the response to this, cycling became the most dominant form of transportation.  Copenhagen is one of many examples of how cities can indeed be more environmentally friendly without affecting the economy in a negative way.

The car has become a status symbol and the use of the car is deeply ingraned in many cultures.  Reversing this will take time and it will require a sustained information and awareness campaign to open people’s hearts and minds to the possibility of change’-a quote from advocates for the In Town Without My Car! celebration which culminates European Mobility Week.  Perhaps it’s time to start thinking about Doing the Right Mix in North America as well as Europe.

This site uses Akismet to reduce spam. Learn how your comment data is processed.